Ask a Ranger: Night Hike... Wait! What was THAT sound?!

Ask a Ranger: Night Hike... Wait! What was THAT sound?!

Click the player above to listen to the episode. Read the article below to learn more about the animals that you heard on the podcast.

Night sounds: A hikers and campers guide to nature's nightlife

In this Ask a Ranger article, we provide you a photo and information for each animal we discuss.

When you take a little wander, you might begin to wonder
About all the sounds that surround you.
Some are like a melody, Songs drifting on the wind seemingly from Schenectady
What ARE these wondrous noises from?

And with that, we begin our hike. For this moment, close your eyes and imagine a warm summer night outside. What do you hear? It is a surround-sound sing-a-long performed by insects. But which ones? The first things we recognize during a warm summer night are the crickets. Within the symphony of crickets, we can hear an intermittent and distinctive “Katie-did, Katie-didn’t” during summer nights into late Autumn. That distinctive call is made by the Katydids. 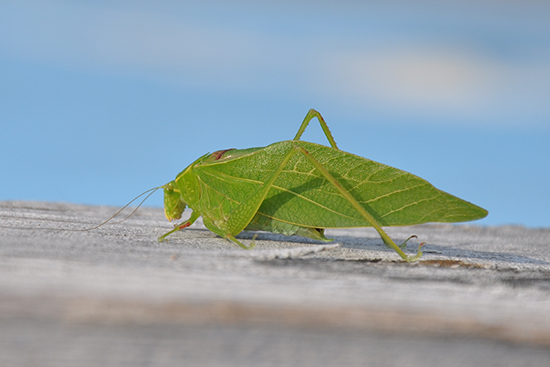 Katydids are bright green insects that look like a leaf (even down to the veins on a leaf) with large back jumping legs. They eat leaves from the tops of bushes and trees as well as sometimes consuming other dead insects.

As we continue our hike and meander down the road, with the night slowly encompassing us into a cool embrace, we see a quick fluttering under the moonlight or street lamps. Maybe you can still hear a high-pitched noise accompanying these quick and nimble night flyers. 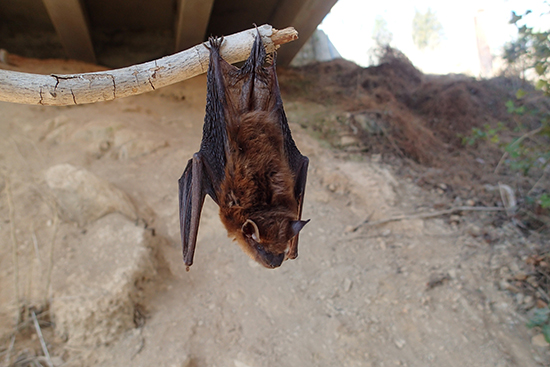 These phenomenal creatures are the only true flying mammals, since flying squirrels and sugar gliders glide (“catch some air”) rather than fly. The species of bats that we have in North Carolina are insectivores, which means their diet consists of insects. It is estimated that one little brown bat can eat the equivalent of 10,000 mosquitoes a night! Wow! Thank you BATS! These tremendous helpers use echolocation to track down and swoop up their prey, including moths, mosquitoes and other flying insects. While bats are vectors for rabies- which means they can catch, become infected, be affected by the rabies virus, and pass the virus. This does not mean they all have rabies. These wonderful night creatures are fun to watch dart and dash in the moon light or a street light and are wonderful parts of a healthy ecosystem. 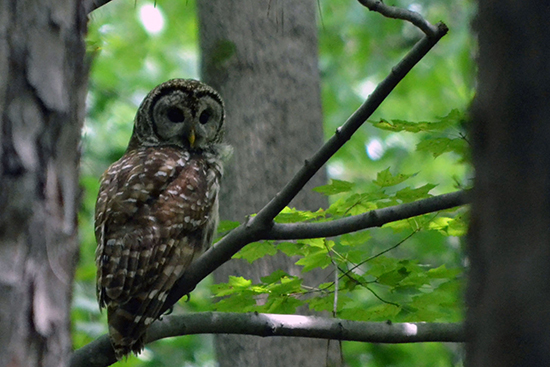 The easily recognizable “Who Cooks for You” call can be heard on a quiet night. This beautifully plumed nocturnal bird has some wonderful adaptations. As the name suggests, this owl’s plumage is striped with a barred pattern. It is one of the larger owl species of North Carolina and has a diet of small rodents, birds, snakes, and insects. The barred owl uses its superior night-vision and acute hearing abilities to pinpoint its targeted prey. Then, with swiftness and ease, the owl quietly swoops down and uses its powerful talons to catch its prey. The reason these owls have the ability to fly silently is the unique noise-cutting edge on their flight feathers.

We continue down the path, round the curve and end up passing by a small lake. Another cacophony of noise erupts through the night from the amphibian life that inhabits the lake and all around. Among these wonderful choir toads and frogs, one low baritone booming is heard clear and resonating. 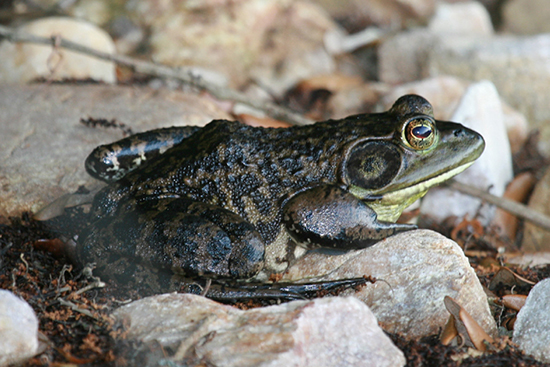 The American bullfrog is the largest of the North American frog species, growing up to 8 inches in size and weighing as much as 1.5 pounds. Even the tadpole form is large, 6-7 inches (think the average length of an adult’s thumb). These large amphibians, like all amphibians, go through a growing process called metamorphosis, or the distinct change in two or more stages. These stages are egg, tadpole, froglet and mature frog. As you can see in the photo above, they have an easily identifiable circular eardrum on either side of their heads. This is called the tympanum, which transmits sound waves to the middle and inner ear so that they can hear and keep debris and water out both in and out of the water. They use their hearing to locate and ambush their prey, including fish, frogs, salamanders, insects, mice, turtles and birds. These nocturnal predators are non-discriminatory with their diet — if it fits into its mouth — GULP! Down it goes! Male bullfrogs (which make the baritone sound you hear around the lake or other water source) are very territorial, which is why you only hear a few in comparison to the chorus of other frog and toad songs around lakes, creeks, ponds, etc.

As we hike deeper into the night we hear a series of barks and yelps. At first, as they split the night open with their piercing calls, we stop, shifting in our boots nervously. Then, as more calls are made, clarity and understanding of the mysterious calls ensues. 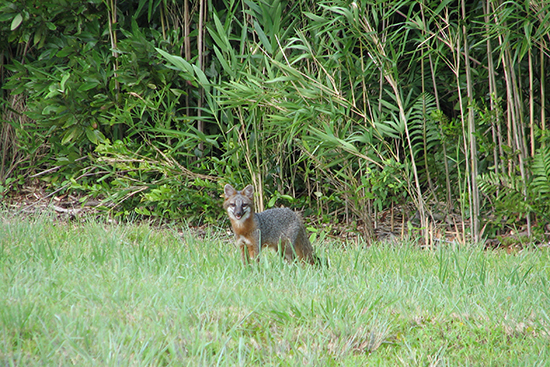 North Carolina is home to both the red fox, Vulpes vulpes, and the gray fox, Urocyon cinereoargenteus. Both are about the size of a medium-sized domesticated dog, although the gray fox is slightly smaller. Foxes are solitary animals, but they do pair up during mating season. When the vixens, or female foxes, are ready to give birth they seek out or dig out a den, which they will typically use year after year. Young foxes, or kits, will stay with mom for the first 7 months learning how to hunt, evade predators and survive. Foxes are opportunistic eaters and will eat everything from fruits to rabbits, grains and fresh carrion. One unique ability of the gray fox is that it climbs trees with the aid of its semi-retractable nails.

Hiking further still we may startle animals bedded down.  You may hear a *SNORT*! Or a thunder of hooves as startled deer run off into the night. 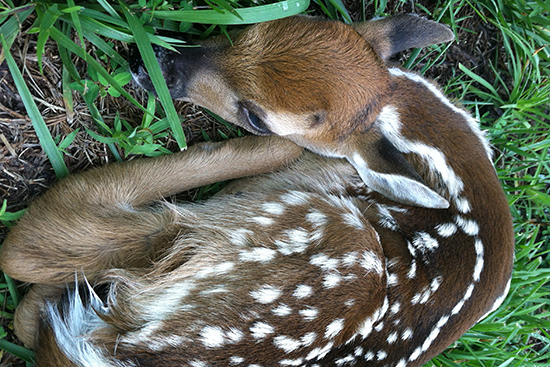 Deer are more typically crepuscular and nocturnal (animals that are active in the low light of breaking dawn and sunset as well as at night). In North Carolina, we have the white-tailed deer, Odocoileus virginianus. These large herbivores’ habitat is woodland and open fields where they graze on vegetation such as grasses, flowers, fruits and acorns. White-tailed deer can run up to 30 miles an hour and jump as high as 10 feet into the air. Does, or female deer, will give birth in early spring through late summer to one or two fawns, or baby deer. These fawns will have a speckled pattern on their fur to help conceal them in the forests and fields when their mother is out foraging. The males, or bucks, will begin to grow antlers starting mid-summer after the age of 1. The antlers will be shed in late winter after breeding season. Each year the buck survives, the larger the antlers will grow.

On our hike, back to where we started, night and the creatures that live in it are in full swing. Far off in the distance we hear a distinctive and soulful howl. If we are lucky, we may hear a few together howling or taking turns. 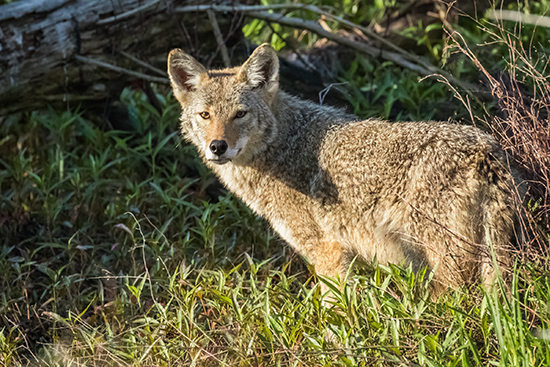 These medium- to large-sized canines can look like wolves at first glance. Coyotes live solitarily but will collect into small packs in autumn and winter for more effective hunting. These small packs usually consist of closely related coyotes. Because of a coyote’s high intelligence and ability to quickly adapt, they can live in every environment from forest to field, deserts to swamp and even into human’s urban sprawl. The coyote is an omnivore and an opportunistic one at that, eating berries, nuts, garbage, roadkill, as well as rabbits, snakes and deer.

We hope you enjoyed your virtual hike!

About the Ask a Ranger Podcast

For a full list of episodes, visit our BuzzSprout page.