The Chestnut Knob Fire at South Mountains State Park remained at about 3,200 acres on Monday, and fire crews continued work to maintain containment lines within the park and just outside the park’s northern boundary. Officially, the fire is considered 20 percent contained. 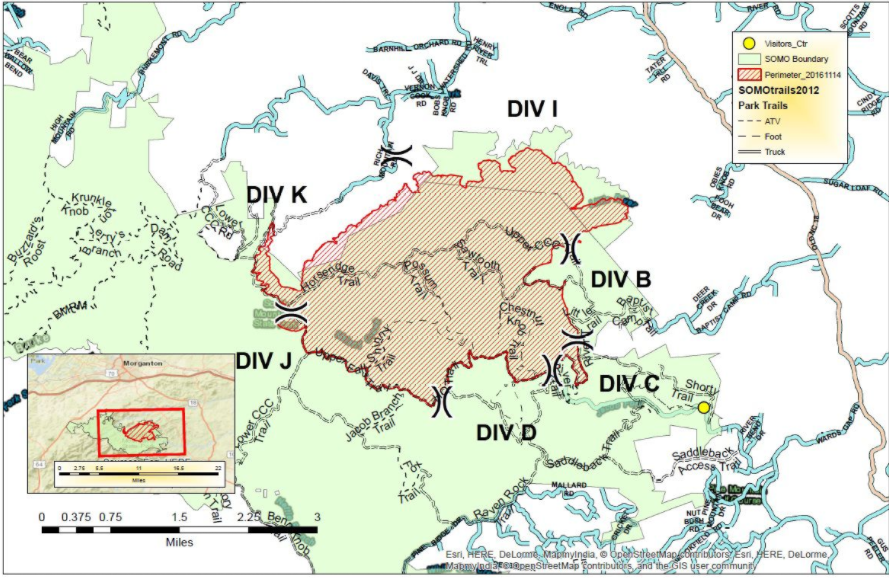 About 120 firefighters are engaged in the incident, including personnel from North Carolina State Parks, the Florida Forest Service, the North Carolina Forest Service and NCFS BRIDGE crews. Four local fire departments are assisting on the fire’s perimeter to aid in protecting private property.

The crews have two major areas of interest. Along the southwest edge of the fire, crews continue to set backfires to prevent the wildfire from escaping into trackless areas of the park to the west, which would make containment especially difficult.

On the northern and northeastern edge of the wildfire, principally on private property, crews are strengthening containment lines – and in some cases relocating containment lines -- to prevent the blaze from advancing further toward private property and dwellings. Aerial support may be available at times on Monday on one or both of these fire fronts.

To this point, there have been no ordered evacuations, though residents in seven homes to the north were asked Friday night to voluntarily evacuate. However, should any evacuations become necessary, Burke County Emergency Management will notify residents in the affected areas through the Reverse 911 system.

The Incident Command Post in Morganton now has a fire information phone line where residents can receive the latest information and ask questions. It is 828-764-9380.