Trails and restrooms at both park accesses are open, but the visitor center remains closed at this time.

All events and programs remain CANCELLED until further notice.

Per Dare County Emergency Management's Bulletin #57 issued on May 6, 2020 at 5:15pm: masks are recommended but not required.

Save Our Sand Dune 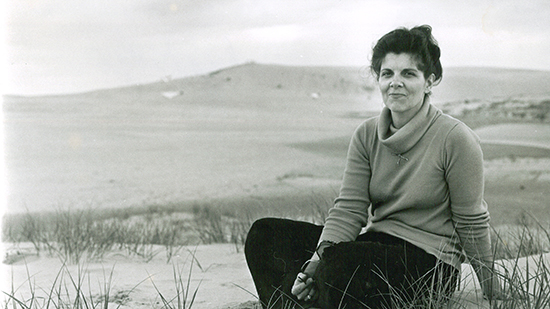 Carolista Baum with the dune in the background. From the North Carolina Division of Parks and Recreation archives.

On a summer morning in 1973, Carolista Baum was alerted to the presence of equipment by her three children. To their horror, an earth-moving machine was preparing a residential development at the base of Jockey's Ridge.

For years, local groups had talked about protecting the large dune from encroaching development, but no appreciable steps had been taken. This destruction, however, forced Carolista into action. She planted herself in the path of the bulldozer, forching the operator to shut the equipment down. From that point on, the effort to "Save Our Sand Dune" took on new determination. The "People to Preserve Jockey's Ridge" was organized. Appeals, backed by a petition, were made to local and state governments. The state's Division of Parks and Recreation was asked to study the feasibility of making Jockey's Ridge a state park.

In 1973, the Division issued a report in favor of the park and, a year later, the dune was declared a National Natural Landmark. In 1975, the General Assembly appropriated funds to create Jockey's Ridge State Park. The initial acquisition of 194 acres was a collaborative effort with matching federal funds, land transfers from The Nature Conservancy and property donated from private landowners. Today, the park encompasses 426 acres.

Long before the first European settlers, the Algonquian Indians inhabited the Outer Banks. Following a sighting by Spanish and French explorers, the ridge became an important landmark for mariners.

Around the 1830s, Francis Nixon, a plantation owner, brought his family to Nags Head to escape illnesses that are prevalent in the farms during the summer. The first hotels in the town sprang up later that decade. After the Civil War, tourism grew as fishing and hunting attracted sportsmen from the North. The construction of roads and bridges in the 20th century provided easier access to the barrier islands. Development picked up at a rapid pace and cemented the area as a vacation destination. Today, the Outer Banks is one of the most popular recreation areas on the eastern seaboard.

Many legends surround the origin of the name Jockey's Ridge. The most popular is that the name of the dune is based upon the early inhabitants' practice of capturing wild ponies and racing them on the flat surface at the base of the dune. The steep sides of the ridge served as a grandstand for spectators. An old map, which is displayed in the park's museum, has the ridge name spelled "Jackey."