The main park entrance and dune are open from 8:00am to 8:00pm. The Soundside access and swim beach are open from 8:00am to 5:00pm. Please be advised that the parking lot at our Soundside Access fills up very quickly. We recommend arriving as early as possible as the parking lot is the only designated area where you may park to enjoy our Soundside beach area. You may be ticketed or towed if you park along Soundside Road or in any other undesignated area. Please look for alternative access sites such as those located on the Cape Hatteras National Seashore.

The Visitors' Center and Museum are open but we have limited capacity at this time.  Please follow the 3-Ws and any posted guidelines.

Trails and restrooms at both park accesses are open.

We are offering limited programming, please call the park for more details.

With 24-hour advance notice, we are offering dune rides to visitors with mobility restrictions on a limited basis, please call the park for more details. 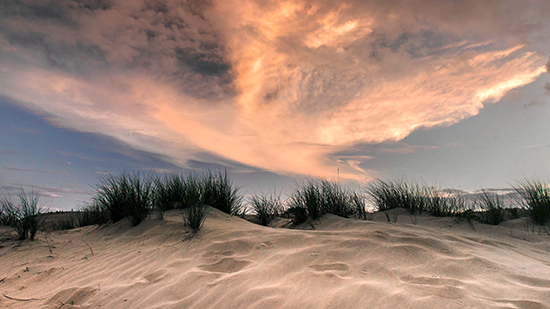 Jockey's Ridge is home to the largest natural active sand dune system in the eastern United States. Shifting maritime winds blow billions of grains of sand in different directions, constantly changing both the shape and the size of the dune. At times, the dune can get as tall as 60 feet. Summer brings a prevailing southwest wind followed by the prevailing northeast winter winds, so the sand is constantly blown back and forth, preventing it from blowing away entirely.

The dunes are an example of a medano — a huge hill of shifting sand that lacks vegetation. There are several prominent sand dunes in the area; of them all, Jockey's Ridge is the most spectacular.

The dunes are believed to have formed 3,000 to 4,000 years ago. Geologists believe that strong water currents from hurricanes and storms washed sand from large offshore shoals onto the beach. Over many years, the wind picked up this sand and blew it inland. These evolved into a system of dunes that now stretches along the Outer Banks coastline. 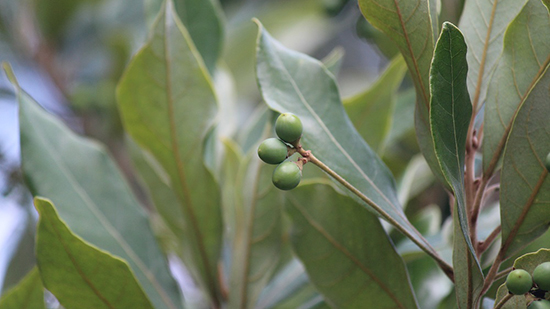 Even though shifting sands provide a somewhat less-than-inviting environment, several plant communities are present in the park. Small pockets of American beachgrass grow along the base of the dune. Thickets of wax myrtle, bayberry, red cedar, live oak and red bay are found in protected areas near the parking lot. A small shrub forest of southern red oaks, sweet gums and loblolly pines may be found to the west of the dune.

The shrub forest gives way to brackish marshes along Roanoke Sound, where salt and freshwater mix to create an estuary. Cattails, sawgrass, broadleaf arrowhead and a variety of sedges dominate the upper freshwater marsh, while closer to the open water, needlegrass rush and big cordgrass give way to scattered smooth cordgrass and other species more tolerant of high salt concentration. 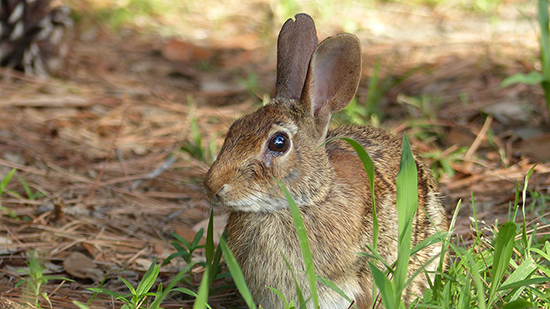 Early morning hikers will often see tracks that rabbits, foxes, lizard and other animals left in the sand during the night. Heavy rains form temporary pools in the lower level of the dunes and serve as a source of water for raccoons, opossums, mice and muskrats.

Bird life is abundant in late summer and fall when large numbers of migrating birds funnel southward. Warblers, sparrows, flycatchers and other species may be seen in the shrub thickets. The soundside is home to a variety of waterfowl in the winter.