Click the player above to listen to the episode. Read the article below to learn more about the Fort Macon cannons.

Cannons of Fort Macon: Then and Now

On April 25, 1862, when Fort Macon experienced its one and only active battle, the Confederate soldiers in the fort had 54 cannons available for the fight. Of those 54 original cannons, none are believed to still exist today. Most, if not all, were likely sold for scarp and melted down in the late 1800s. For the last 15 to 20 years, the park — with a lot of help from our Friends group — has worked on obtaining representative replicas or original examples of the different types of cannons that made up the original 54. At the time of this article, the fort now has nine cannons of the 54, all mounted in locations where they historically sat during the 1862 battle. Here is some background about the different types of cannons you will see when visiting Fort Macon State Park! 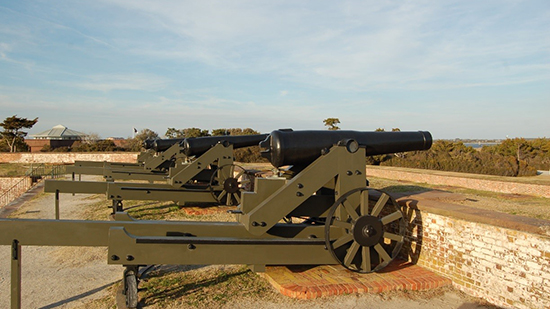 Of the 54 cannons at Fort Macon when the Union attacked on April 25, 1862, 22 were 32-pounders. The name comes from the weight of their cannonballs. These cannons were originally smoothbore (barrel smooth on the inside) weapons with a range of 1 mile. In October 1861, four of these cannons were converted to rifled artillery. The rifling conversion increased the range from 1 mile to 3 and 5 miles. These rifle conversions had a tendency to explode if they were not properly reinforced, so the Confederates were a bit gun shy (pun intended) about using them. Today, Fort Macon has six 32-pounders on her ramparts. Four of these guns are functional replicas that are fired during special events. The other two are fiberglass replicas. N.C. State Parks partnered with Wayne Community College to produce the gun carriages for five of these six cannons. 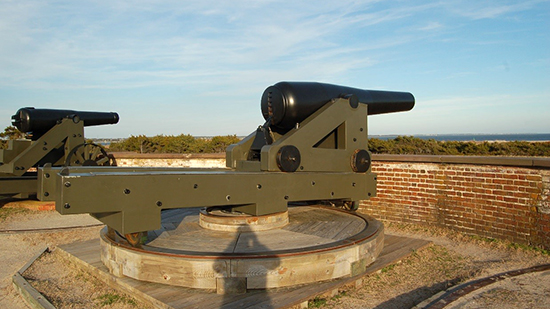 Columbiads were the largest seacoast cannons made in the mid-19th century. Of the 54 cannons on the fort during the battle, five were 8-inch columbiads. This gun was a smoothbore cannon but was able to shoot its 65-pound ball up to 2.7 miles away. The Confederates also had a sixth cannon of this shape and size, but instead of an 8-inch smooth bore, it had a rifled bore of 5.82 inches. Currently, Fort Macon has one 8-inch columbiad cannon. It is a functional replica, and the park shoots it for special events and programs. The company who cast the barrel believes it to be the largest functional cannon produced for re-enacting purposes since the 1800s. The barrel alone weighs around 9,300 pounds. 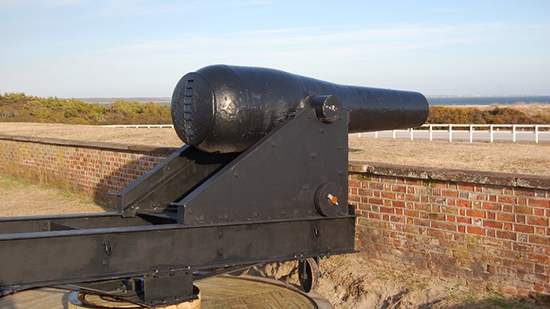 The largest cannons in use on Fort Macon during the battle were two 10-inch columbiads. These cannons could hurl their 128-pound cannon balls up to 3.2 miles away. The most recent addition to Fort Macon's armament was the 10-inch columbiad pictured above. It features an original barrel from the 1860s! This cannon is the same model and was made at the same foundry as the 10-inch columbiad that was used to protect the fort 150 years ago. Park staff used pictures taken in 1867 and other historic documents to place this gun in the location it would have been in during the battle. 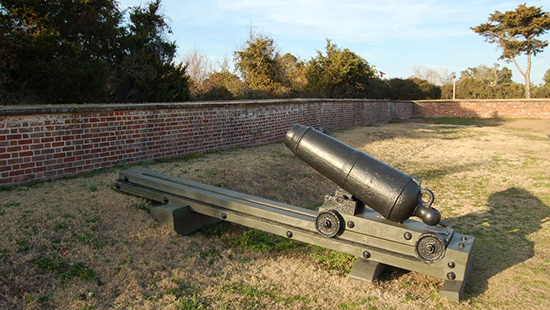 Carronades were stubby naval broadside cannons that had become obsolete for naval use by the mid-19th century. However, they were frequently used in forts for flanking defenses because they could fire large amounts of ammunition at close range into enemy soldiers during an assault. Confederates placed six 32-pounder carronades in counterfire galleries under Fort Macon's outer wall for flanking defense. During the siege of Fort Macon in 1862, these carronades were also used as mortars to lob exploding shells into Union siege emplacements. Today, Fort Macon has one example of a 32-pounder carronade, an original barrel on loan from the U.S. Navy. You can find it on the northwest outer wall, mounted in a configuration the Confederates may have used when they tried to repurpose the carronades for mortars. 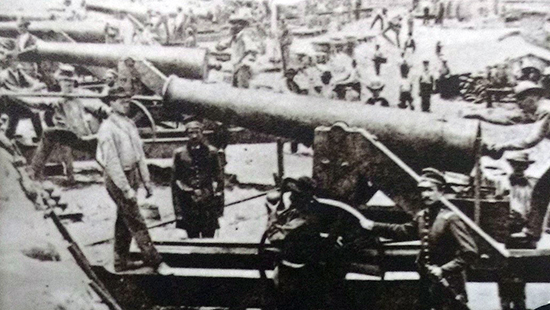 When the construction of the fort was finished in 1834, the first cannons sent to the fort were 17 24-pounders. When the battle took place in 1862, Fort Macon had 18 cannons of this type in service. Currently, this is the only type of cannon used in battle that Fort Macon State Park does not have on display at the fort. A 24-pounder is a smoothbore weapon and could fire its 24-pound cannonball up to 1.08 miles away.

Other cannons you can see at Fort Macon 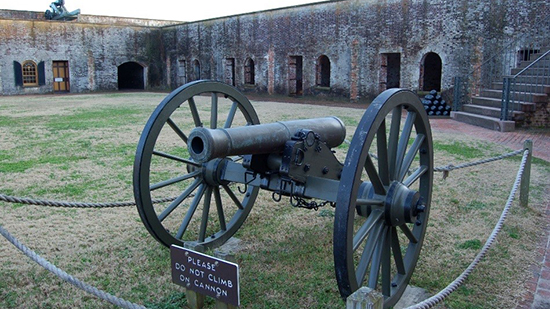 Fort Macon had a few 6-pounder field cannons on hand at the beginning of the Civil War. These lightweight field guns are the smallest regulation caliber used in the war and fired a 6-pound ball just under a mile away. This is an original cannon made in 1864 and was purchased for the fort in 1952. It is not known where it actually fought. The fort's small field guns such as this were soon transferred out to various North Carolina artillery units and were not present in the fort when the battle took place. Four of the 6-pounder cannons from the fort were captured by the North during the Battle of New Bern. One was presented as a trophy to the 21st Regiment Massachusetts Volunteer Infantry and still survives today. It can be found at Amherst College in Massachusetts. 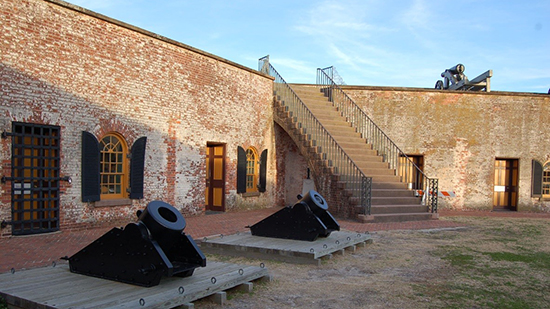 These two mortars are the only cannons of the fort's original armament that are known to exist. They were brought to the fort in June 1862 by the Union Army after the battle and could fire an 88-pound exploding shell up to 1.2 miles away. When the Union Army attacked the fort, they used four similar mortars against the fort. Mortars were very useful because they could lob their shells up high to drop down into hidden enemy locations such as Fort Macon. 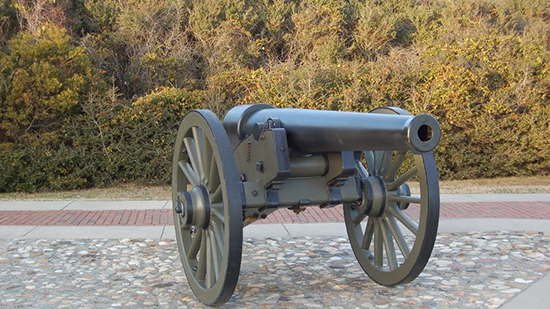 The bombardment of Fort Macon was the second time in history that rifled siege artillery was used against a fort in combat. The Union Army had three 30-pounder Parrott rifles in action against the fort that did great damage and caused its surrender. Its 30-pound rifled projectile could be fired up to 3.8 miles away. The Parrott rifle at Fort Macon today is a modern functional replica.

About the Ask a Ranger Podcast

For a full list of episodes, visit our BuzzSprout page.