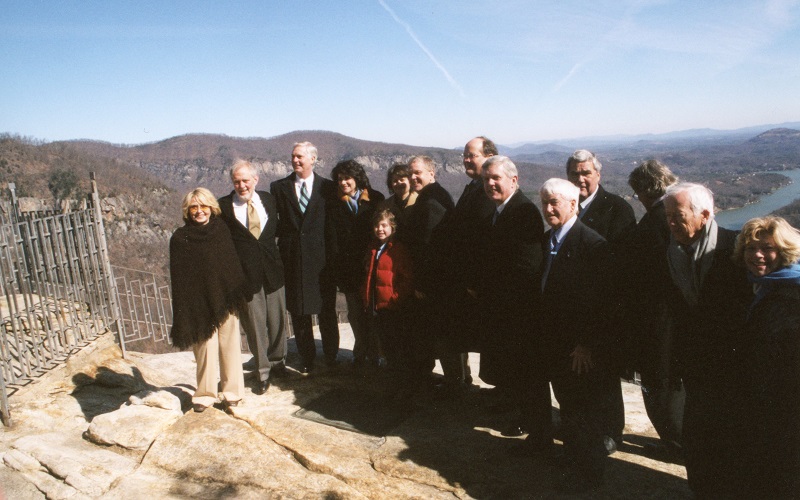 Chimney Rock State Park, the icon of Hickory Nut Gorge, was established on May 4, 2005 with the purchase of the 1,568-acre World’s Edge tract for $16.1 million from the Carolina Mountain Land Conservancy.  The World’s Edge is notable for its overall biodiversity and takes its name from the spectacular, one-mile long series of steep, southeast-facing rocky slopes on the edge of the Blue Ridge Escarpment.  This land is part of a greater gorge known as Hickory Nut Gorge.  That is why the park was originally named Hickory Nut Gorge State Park.  At that time, the Chimney Rock Access was owned by a private company.

By 2008, the Rumbling Bald tract was purchased and that side of the park was officially opened for rock climbing.  This area forms a habitat mosaic that allows for unusually high biodiversity and includes several large fissure caves, sheer cliff faces, and two large boulder fields.  This landscape has some of the best rock climbing and bouldering in the Southeast, and other community partners, like the Carolina Climbers Coalition, have come forward and purchased land in the area to ensure its protection and continued recreation.

Major infrastructure improvements in the Chimney Rock Access began in 2008 after the closure of the Skyline Trail, the Cliff Trail, and the Needle’s Eye. Between 2009 and 2010 the lower section of the Skyline Trail (now known as the Exclamation Point Trail) was reopened, and projects began that would improve the elevator, entrance bridge, and the park’s water system.  Parking at the Rumbling Bald Climbing Access was also improved.  The Subway, Grotto, and Pulpit Rock were in turn closed in preparation for repairs.

After much public involvement, the Chimney Rock State Park Master Plan was released in May 2011.  It addressed future access, trails, and recreational activities and laid out the vision for the park for years to come.  The park also continued with elevator upgrades and began renovations to Outcroppings Trail's upper section and the Sky Lounge.

In 2012, land continued to be purchased by the state from private citizens as well as community partners, like the Nature Conservancy who assisted in acquiring 1,100 acres near the top of Rumbling Bald Mountain.  Other projects continued in the park that upgraded the elevator, restroom facilities, Sky Lounge, and the two lower sections of Outcroppings Trail.

Work started on the 1.5-mile Rumbling Bald Trail in 2013 and was completed near the end of 2015 with the help of the Friends of Chimney Rock State Park, the Carolina Climbers Coalition, and the Carolina Mountain Club. By this time, the state also completed and reopened the Subway, Grotto, and Pulpit Rock sections of the Outcroppings Trail.

The re-route of the old Skyline Trail begain in 2016.  This new 1.1-mile trail will allow visitors to regain access to Peregrine’s Point and to the top of Hickory Nut Falls.  The Park hopes to open the new Skyline Trail sometime in 2017.

The Park has partnered with the Town of Lake Lure and the Carolina Mountain Land Conservancy to provide new access to Eagle Rock through the Weed Patch Mountain Bike Trail.  This trail starts in Buffalo Creek Park and will travel approximately 10 miles to Eagle Rock near the top of Shumont Mountain.  With this new access, the park hopes to add recreational activities to this area by the end of 2017.

Today, the park continues to make improvements and has protected 6,892 acres on both sides of Hickory Nut Gorge.  With the Master Plan as its guide and the general public as its advocate, Chimney Rock State Park will continue to protect and provide access to the natural resources that our visitors value and expect within our North Carolina State Park System.